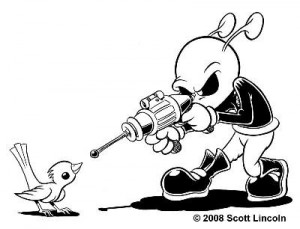 Scott Lincoln is the creator of “Ralf the Destroyer”, a mischievous “anti-villain”. You may be wondering what an anti-villain is, and Scott explains it is a villain who can’t help but being good. And it causes Ralf a lot of turmoil. Scott is a very talented cartoonist and I love his work, I was thrilled to have him answer some questions for me! You are going to love “Ralf the Destroyer”!

David: Hey Scott! Let’s start from the beginning, how did you get started in the cartooning or comics business? How did you decide this was the career path for you? 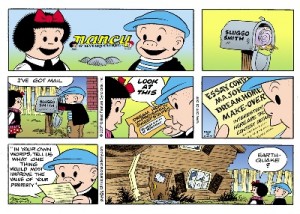 Scott: I started on the path when I was in fifth grade when recess got rained out. I, and a few friends, tried to draw Garfield, but couldn’t. We came up with a strange bird named Clyde. Of the group I was the only one to continue and soon developed a comic strip from it. Professionally I started at age fifteen, that’s when I got my first comic (Kabloona) published weekly in local papers for about three years. A number of years passed after that and I couldn’t seem to shake my need to write and create characters. I eventually met Guy Gilchrist, who was the artist on Nancy, and I became a full time cartoonist while assisting him. To the follow up question I’d have to say, it was decided when I realized nothing else would satisfy me. 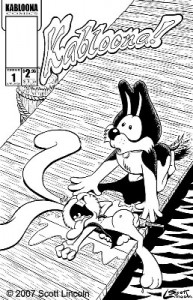 David: You have worked on various comics in the past for other people, can you tell me a little about your experience working in the field of comics?

Scott: When I did my first strip Kabloona I was very inexperienced but people liked that my characters were expressive. When I started working with Guy I wasn’t much better. But Guy just kept hitting me with sticks so I got better. Seriously though, it actually was during this time when I learned the most skills and about the industry. My work simply would not be where it is now if I hadn’t the great opportunity to apprentice. During this time I also happened to have a strip distributed by DBR Media for about two years called “Solomon Road”. I worked briefly at a Flash animation studio, illustrated a graphic novel for kids through Rubicon Publishing, work as a caricaturist in the summer and work freelance. I am presently working on illustrations for the second edition of an RPG called “Tales of the Wandering Vagabond”, which has been a lot of fun so far.

David: “Ralf the Destroyer” is a cool web comic that you have created. I love this little alien. Where did the whole idea of Ralf come from?

Scott: While I was working with Guy I was also taught cartooning at his cartoon academy. When ever we had a mixed batch of students we would do a lesson called “Draw the Alien” as it seemed to transcend age and gender divisions. One night I was teaching the class and decided to put a uniform on the alien and customize it a bit. My friend Brian said it was awesome and he should be the class mascot, he just needed a name. I though a moment (and because I like contrast) wrote “Ralf the Destroyer”. That was the fall of 2004. The “idea” of Ralf stems from two main ideas; Taking every reason I heard about why an alien comic strip could not be syndicated and turning them upside-down… and the second is “write what you know”. Ralf symbolically represents “alienation” which was a large part of my life. Never quite fitting in anywhere but feeling like there is something out there that only you can do.

David: With that in mind, what are your future goals with the comic? 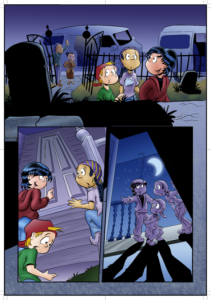 Scott: My goal is to get Ralf the Destroyer syndicated and in newspapers around the world and simultaneously run a comic book series that fills in the back story of where Ralf comes from and why he’s really here.

David: Last question, who is your favorite cartoon/comic character, which one do you most identify with?

Scott: Besides Ralf?… It kind of changed as I grew, starting with Linus when I was a wee lad, favored Garfield in the early eighties, then Opus later on and (though I didn’t necessarily identify) I was a big fan of Calvin an Hobbes.

Thank you so much Scott! Go check out Ralf the destroyer at:
www.ralfthedestroyer.com

or his on-line gallery at:
www.ifreelance.com/pro/33461

his DA Portfolio at: 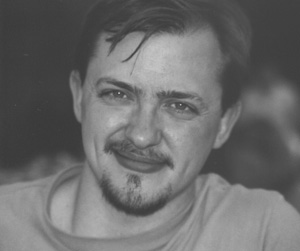