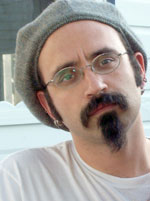 Frank Page is one talented artist and cartoonist. His comic “Bob the Squirrel” tells of a squirrel with attitude and Frank’s own inner voice coming to the surface. The character Bob originated while Frank watched a squirrel scamper across a power line and inevitably became the starring role in one of the funniest and well drawn comics I’ve seen. So what a thrill it is to have Frank Page featured on “Don’t Pick the Flowers” and answer a few questions about his life and “Bob”.

David: Hey Frank! What a privilege to talk with you about your comic “Bob the Squirrel”. When did you become interested in being a cartoonist and decide to start your own comic strip?

Frank: I think it’s safe to say that cartoonists don’t decide to start comic strips, panels, comic books…it just sort of happens one day.  I’ve drawn my whole life.  I was a very shy little kid; but, with a pencil and piece of paper in front of me I was unstoppable.  Drawing helped me get through some very lonely years, it was (and still is) my dearest and closest companion.  It was my form of communication to the world who wouldn’t necessarily look twice at me.  I had a comic strip in my high school newspaper, then college, then after college. It’s just something I’ve always done.  It’s like breathing to me.

David: I really like Bob the Squirrel and he has a bit of an attitude. Where do most of your ideas for the comic come from?

Frank: Bob the Squirrel was the culmination of many, many failed attempts at creating a comic strip…rather, attempts at creating a SUSTAINABLE comic strip.  Sure, you can come up with 24 great ideas and send them off to the syndicate, but if 24 is all you have… you could have a real problem.  The idea of a squirrel came to me completely by chance, one of those great: “Bruce Wayne sees a bat and becomes BATMAN” moments.  Using myself in the strip seemed to me to be pretty organic too.  I’ve always admired the work of cartoonist R. Crumb.  His line is what initially grabbed me.  But, as I got more and more into his work, I was astounded by his complete and utter honesty… bravely exposing (literally and figuratively) all of his weaknesses on the page.  Every wart, pimple, cut and bruise was there… and he hooked me forever.  Honesty is everything.  So, that’s how I approached Bob.  If I expected people to invest themselves into the strip, I should be willing to do the same.  My ideas come from my life…95% of what happens in the strip, happened to me.  Love, loss, depression, pain, triumph…all the warts are there.  Those warts make the strip real…even with a talking squirrel thrown in.  I routinely have people ask me if I have a pet squirrel… (i don’t).  Whenever I hear that, I know that I’ve done something right.

David: What’s the best description you would give of Bob and his attitude towards life?

Frank: Bob is the friend I wish I had in real life.  He’s brash and

cute.  He says what he wants to say and pays no attention to the consequences of those words.  He’s self-centered,  needs constant attention, wants to be loved on his terms.  But he’s loyal.  He’ll do anything for you…after he throws a sarcastic comment on it.  He wants the best, but doesn’t know what the best is.  Despite all this, he’s still not completely comfortable in his own skin…if he had a choice, I don’t think he would have chosen to be a squirrel, but he does what he can with what he has.

David: What are some of your favorite comics and which have been the greatest influences on you? 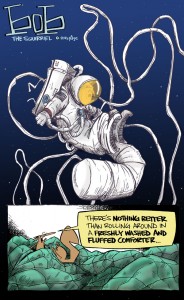 Frank: As I mentioned, R. Crumb is a huge influence.  His hand in my style came a little bit later.  I think all ink slingers of my generation would cite Bill Watterson’s Calvin & Hobbes as their genesis rock.  But, comics aren’t the only things that have influenced me.  Believe it or not, the comedians of the silent film era: Chaplin, Keaton, LLoyd, Laurel and Hardy, have played a substantial role in what I do.  How do you tell a story with little to no use of dialog?  These comedians were visual to the millionth degree… not because they wanted to be… because they didn’t have a choice.  They used what they had to get the story moving…in doing so, created masterpieces that are still marveled over 100 years later.  If you’ve never checked them out, you really should.  Watching their work won’t teach you how to draw, but it will teach you pacing, comedic elements, storytelling…all vital instruments in a cartoonist’s arsenal.

David: You’ve been drawing Bob for some time now. What do you consider to be the most significant change since the origins of your comic?

Frank: I’ve been drawing Bob since 2002.  Characters, ideas, places have drifted in and out as they do in our daily lives.  Since the comic began, I’ve been married and divorced.  I’ve walked away from everything I knew and started over.  I fell hopelessly in love with a woman I thought only existed in my dreams.  I’ve gone back to school to get my Master’s of Fine Art degree, on my terms. I’ve become a homeowner, a dog owner, a father figure.  I’ve been praised and braised.  I’ve won and I’ve lost.  I’ve built another life: Frank Page v.2.0.  Throughout it all, I’ve learned.  The day you stop being a student will be the day you stop growing as an artist and human being.  I’ve become a better man…not a changed man, a better man.  That is something that only happens with experience and over time.  Do I still have my bad days?  Absolutely.  Do I still get discouraged?  Absolutely.  That’s life.  That’s my comic strip.  To answer the question, the strip has totally changed and at the same time remained the same.

David: Last question, what can we expect to see from you and Bob on the horizon?

Frank: Reliability.  No matter what, Bob is always going to be

there.  I’m starting to dabble in exclusive electronic comic downloads…expect to see many more of those posted on a regular basis.  There will definitely be more books and a greater presence in the social media galaxy.  I might also revisit some Bob the Squirrel animation projects in the vein of my 2009 short “bob the squirrel talks to God”.  But mostly, I want to continue producing a quality strip that people can enjoy and possibly learn from.

David: Bob the Squirrel is a great comic, fun to read and fantastically drawn. Thank you for talking about your life as a cartoonist and the creation of Bob. For more information about Frank and Bob check out these websites: