Piers Baker: The Gem of Ollie and Quentin 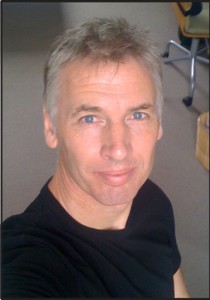 Ollie and Quentin is one of the most endearing comic strips I’ve ever read. It is beautifully drawn and the humor is genuine. Every time I read Ollie and Quentin I can’t help but laugh. British cartoonist Piers Baker is the mastermind behind this gem of a masterpiece. I asked Piers a few questions about his characters and his life as a cartoonist, and how delighted I am to share his responses with you here.

David:  Ollie and Quentin are an unlikely pair of characters you created back in 2002, and were syndicated in the United States and internationally in 2008. During this period of time what was going on with your comic strip? I have read you took your time creating your comic and wanted to present the very best work you had to a syndicate. You were picked up very quickly at this point.  What was this fine tuning period like for you?

Piers: Ollie and Quentin started life as a comic strip I produced for the Royal National Lifeboat Institution (RNLI) here in the UK. The lifeboat charity produced a quarterly magazine for their young members starring their own cartoon mascot called Stormy Stan the Lifeboat Man. I was asked to put this character into a comic and decided to give him a seagull sidekick called Eric (now Ollie). I really enjoyed creating this comic and wanted to produce more than just the four strips a year they required. I approached the organization with a proposal that we sell it as a weekly comic to small, local newspapers whose circulation covered one of the hundreds of lifeboat stations around our coastline. Newspaper editors liked the idea of supporting a popular local charity, the RNLI got some free publicity and exposure and I got the chance to hone my skills as a writer and comic strip illustrator. We shared the profits 50/50 so it was a win-win situation all round. In fact, selling the comic was pretty easy and it is a route into newspapers I would recommend to any potential comic strip creator.

I produced and distributed the comic myself over the next 5 years which gave me the opportunity to develop the characters in a nice methodical manner. I got used to drawing them every week and got many of the inevitable bad jokes out of the way so by the time I considered approaching the syndicates my strip was pretty well developed. In fact my editor at King Features said it was ready to go from day one. The beauty of having produced so many comics before contacting the syndicates was that when I was asked to send a second batch of strips for consideration (after my initial submission) I had plenty of good ones to choose from.

So, very little fine tuning in the year before launch. We had some legal issues with the RNLI which we resolved amicably (they’re still a good client of mine). I couldn’t use the Stormy Stan character and had to replace him with Nobby (the dreadful nickname my mum gave me as a child). Eric had to become Ollie (who got his new name from the number on his ankle ring: 31770 but read upside down) and Quentin stayed as he was. He had been my own creation and is named after my youngest brother.

David: You’ve created your own little world with Ollie and Quentin, what’s it like on a typical day when you are writing, drawing and coming up with ideas for your comic?

Piers: I LOVE writing my comic. This has been the biggest syndication surprise for me as I always considered myself an artist first and writer last. I write and draw every day. I can’t write at home so I cycle into my local town and get into a coffee shop before it gets too crowded. I like the buzz of people around me and even get ideas from the odd word or phrase I hear them use. Sometimes it’s just something someone is wearing or the way they are behaving that sparks an idea. I then write and doodle for the next couple of hours until I have a decent comic written then cycle home and draw it up ready for my editor to see. He calls me once a week to go through the seven or eight strips I send him.

David: One of the things I love about Ollie and Quentin is the simplicity in the writing and art. In fact one of my favorites is where Ollie throws Quentin off the roof to teach him to fly. There’s no political or shock value. Where do you gain most of your inspiration from when writing your comic?

Piers: This is always a difficult question to answer. A handful of areas I think.

I’m surprised how much of my own life is in my comic. One or two strips a week are things that are happening in my life. Family, kids, health, friends, love, sport etc. Another area is word play and a third is finding a ‘juicy’ topic that gets the creative juices flowing. It’s difficult to come up with a joke from nothing, a blank canvas, but if someone says write a gag about, say, a ladder or a unicycle or something it’s much easier. I give myself these ‘juicy’ topics and ‘throw’ them at my characters to see how they react. One character would say something and I’d write the other’s reply. My hope is to recreate a spontaneous environment similar to a group of friends around a table where a sudden quip makes everyone fall about the place.

David: With the advent of so many comics being pulled from newspapers and of course now the over flow of web comics, what’s your take on comics in the way we share and view comic strips? What do you think of the state of comics today?

Piers: The future of comics is not in newspapers. This is a sad thing for me to say because all my life that is where I’ve wanted a comic of mine to be. I wish it were not so but nothing I am seeing tells me otherwise. Sadly newspaper sales are the measure of a comic’s success at the moment which is understandable as that’s where the money is, but it’s shortsighted. The future of comics is on screens. Newspapers aren’t going to vanish so neither will newspaper comics. The number of comics will be greatly reduced until you have something similar to us in the UK where even our most popular national papers only run 5 or 6 comics and those tend to be very safe and uninspiring choices. The thing that most baffles me about comics in newspapers is this ridiculous need for familiarity. Newspaper readers would rather a tired old comic long past it’s sell by date grace their funny pages than a new, funny and exciting one. Readers don’t like change but if things don’t evolve they die and that’s what’s happening. New young readers aren’t going to be drawn to newspapers whose comics belong in the ark. They will go online where the content is new, different, bright, bold and exciting. It may even move! Yes, much of it may be garbage but there are some amazing strips online and those young readers will find them. We have smart phones, laptops and ipads and comics look great on them. Not boring, poorly printed, black & white halftone blobs reduced to microscopic proportions as in many newspapers. I prefer my comic to be seen and read on a screen. It looks far better that way and is why I take such care to color it well. I like the King Features ‘Comics Kingdom’ application. I know it’s got its technical issues but the idea is a good one.

I’d like to see micropayments become commonplace for quality online content but this may never be practical. We think the internet is free but it’s not. We’re all paying somebody, somewhere so why not pay for the content we really enjoy?

David: Do you see yourself in Ollie and Quentin? Maybe one you identify most with?

Piers: I am both of them. In fact I’m Nobby too. The parts of them I am not are characteristics I aspire to. I’d love to have Quentin’s adventurous spirit. I am probably more like Ollie as I am fairly calm and very patient though I do enjoy exciting times if they’re thrust upon me.

David:  Being a British cartoonist, do you find it hard to make that cross over to an American audience, or even internationally?

Piers: It is hard. My work is appreciated more here in the UK than in the USA so something isn’t translating. Seeing what sells in US newspapers has taught me that a comic about a Seagull and a Worm probably won’t connect with US readers no matter how funny it is. My daughter has just returned from a six week long trip around the USA and talking to her makes me realize my British humor will probably always struggle to engage an American newspaper audience. Internationally, I think it works better. Australian and European readers seem to react positively so maybe that is where Ollie and Quentin’s future lies.

David: And how about words of wisdom for anyone who wants to become a cartoonist?

Piers: Draw LOTS of comics before submitting to any syndicate, maybe 200-300. That gives you plenty of time to develop your characters and style. This way you get the bad jokes out of the way and will have a pool of great gags to send to the syndicates.

Make yourself laugh. If you find it funny so will someone else.

Read other strips to get the ‘rhythm’ of comics. Calvin and Hobbes does it for me.

Be ruthless! Edit Edit Edit! “Kill your darlings”. Lose text and drawings if they aren’t absolutely necessary. Less is more.

Don’t do it for the money. Most cartoonists could earn far more doing far less of something else.

That said it is, without doubt, the best job in the world. If you can make a living at it, it is deeply satisfying and great fun. What can be better than thinking up daft stuff and drawing silly doodles to illustrate it? Ok, you’re not changing the world but you’re occasionally make it laugh.

David: And you truly make me and so many others laugh. Ollie and Quentin is a true gem of a comic. I wish you continued success internationally and expect and hope for your success in the United States as it is much deserved.

Find out more about Ollie and Quentin at: www.ollieandquentin.com