I had mentioned in an earlier blog post you could follow my drawings for #inktober 2015 on the Don’t Pick the Flowers Facebook page or on Instagram, and now I will share half of those for you on today’s blog and the other half next week.  The challenge was exciting and a bit tiring. The tiring part was mostly posting to social media, yes I did also post them on Twitter, Tumblr and Pinterest, but Facebook and Instagram is where I focused most. Drawing every day is very important, but I also work plus create and share comics at least 3 times a week, so October may have been a partial blur, not really, but I did stay busy! But I truly enjoyed the drawing and challenge of this year’s #inktober. So here are the inks and a little explanation of each one. 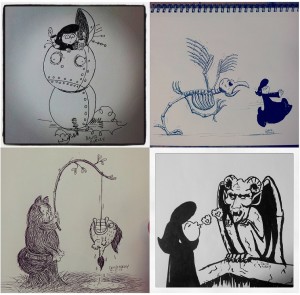 Top Left: Suzanne with Tim Burton’s “Robot Boy” (from his book The Melancholy Death of Oyster Boy and Other Stories). Top Right: Suzanne being chased by a huge Raven Skeleton. Bottom Left: My own little creation here, kitty goes fishing. Bottom Right: Give a kiss to the Gargoyle. 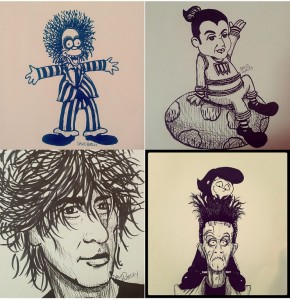 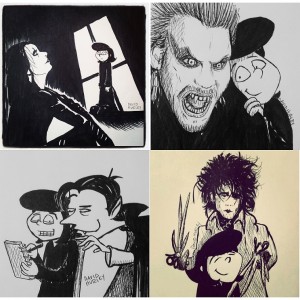 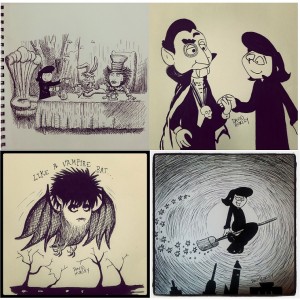 Top Left: I drew a Lewis Carroll type sketch adding Walt Disney’s 1951 animated version of the March Hare, Tim Burton’s Mad Hatter (Johnny Depp), and Suzanne. Top Right: Suzanne meets The Mad Monster Party’s Count Dracula. Bottom Left: I am super stoked that The Cure will be touring North America in 2016, YES I HAVE TICKETS!! This is my tribute to my favorite band and my weird version of the song “Torture”. Bottom Right: Suzanne is “Bewitched” . . . yes my version of the TV show that ran from 1964-1972 on ABC.

And there is the first 15 drawings from inktober 2015. I used micron and copic markers in the drawings. Until next week, keep drawing and “don’t pick the flowers”.