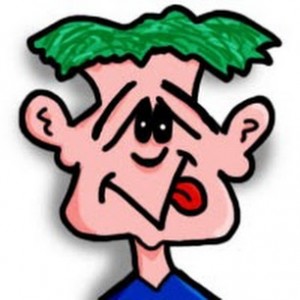 If you have been around webcomic circles, more than likely you have heard of “Bearman Cartoons”. As most cartoonist do, Bearman uses social networks like Facebook and Twitter to promote his work and has really embraced Google+ giving the other networks a run for their money with sharing, comments and of course +1’s (makes us all want to head that direction). And the beautiful part is the public loves his work especially with his most recent caricature of Charles Ramsey. In the month of May, Bearman is having his annual Cartoon Charity Challenge so let us go behind the scenes and ask some questions about his art and worthy cause.

David: Hello Bearman, thank you for being featured at Don’t Pick the Flowers. To start with, how did you become involved with comics and what is Bearman Comics all about?

I used to draw as a kid for fun.  When I went to college for my Business degree, I needed a few more hours so I took a beginning drawing class.  It was taught by a grad student who was awful and I never took another art class again.  Fast forward years later and I was following a local Cincinnati blog.   One day a cartoon idea came into my head and I asked the guy who ran the site if he would post it.  This was my very first cartoon I drew in 2005: www.flickr.com/photos/bearmancartoons/3084059913/

Since then I went out on my own in 2008 and started beartoons.com first on wordpress and then one my own hosted site.   It has also expanded beyond political cartoons to include pop culture and anything else that runs through my mind at the time.   A few months ago, I gave up my rigid Sunday/Wednesday posting schedule and it has freed me to take more risks with my art such as this caricature of Peter Dinklage from Game of Thrones. 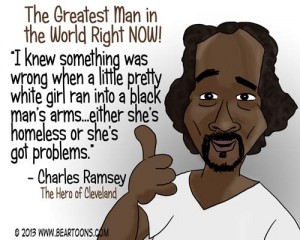 Something completely outside my normal style.   Also, it allows me to react more quickly to news of the day.  My latest cartoon would never have been successful if I waited for a regularly scheduled posting.  It blew up on Google Plus and Facebook (I have never got any traction on Facebook prior).

David: Over the last few years, you have held an online Cartoon Charity,and donated a good deal of money. Can you share details of the Charity and how we the fans can help in your cause?

Sure all the details for this year’s Challenge are at beartoons.com/2013/04/30/bearman-cartoons-charity-challenge-2013.   I am very 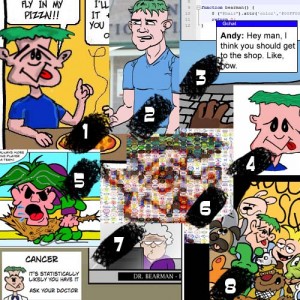 fortunate to live in a household where both my wife and I work (outside my cartooning).   I know there are people out there that can’t afford to donate to charity so I wanted to create something where they could get involved.  So during the month of May I will donate money to three charities for every time someone does one of the tasks in the list.  Things such as paying $1 for every new Google Plus follower I get or for webcartoonists putting my green haired avatar somewhere in their webcomic during the month. Here is a sample of some of them from 2012:

David: What are the comics you enjoy reading, and who are some of your cartooning heroes? 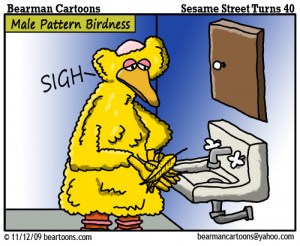 There are tons.  When I first started out, I thought I was the only one doing it.  The first two comic guys I came across were Nate Fakes of Break of Day and George Ford of AddanacCity.  Those guys encouraged me even when I thought my stuff was really crap and I appreciated it.  Since then I continue to find great cartoonists all the time.   I am drawn to humor versus dark stories or long story arcs.  The exception is Aidan Casserly’s Scapula.  He has long story arcs but each one is a mini humor comic in itself so he keeps you engaged.   Sadly, because there are so many I follow I can’t hit them all anymore but I try to check in as much as I can. 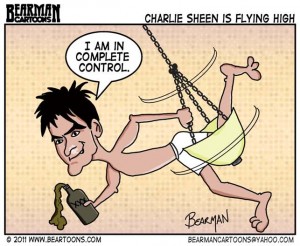 David: What is your favorite thing about being a cartoonist, “why do you do what you do”?

Attention!!!  Haha.  Seriously it is a creative release for me but I love the attention that some of my stuff draws whether on my site or social media.   I like it when someone tells me my work is cool or funny.  Beyond that, I am a lifelong learner who always is looking for new skills.  Because of cartooning, I learned about Photoshop, setting up and running a blog, social media, etc.  All are skills I can take to my day job.

David: What are your future goals with Bearman Cartoons and what can we expect in the future?

I have been doing more and more caricatures so eventually I would like to really put a push to build that business.  I also have two books in my head I want to write.  One I plan to illustrate and the other I have someone in mind but I don’t know if I can afford him.   Time will tell.  The beauty of not having recurring characters or a set schedule is that I get to do what I want and thankfully, there are people willing to take that ride with me.  I truly appreciate all the support I receive.

David: Great, I hope you are able to build your caricature business, plus write and illustrate those books. I look forward to that as some many others do. And good luck with the Charity Challenge, I know it will be a success again this year. Thanks again for stopping by Don’t Pick the Flowers and sharing your art and humor.

And for all those not connected to Bearman Comics, click on the links below and follow him!