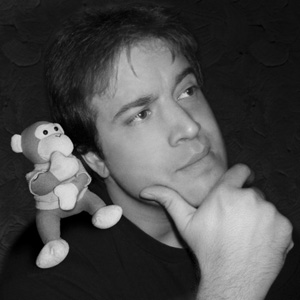 Vince Dorse is a true talent who illustrates beautiful artwork and has a brilliant comic called “Untold Tales of BigFoot”. I became aware of Vince with his first installment of Untold Tales of BigFoot back in August of this year through another cartooning buddy. Immediately I was intrigued and knew I wanted to share Vince’s work, and I’m happy to say that Vince obliged me with an interview. So today I am thrilled to share the wonderful work of Vince Dorse with you at Don’t Pick the Flowers.

David: Vince, thank you so much for stopping by Don’t Pick the Flowers and sharing your work. You have beautiful art that I’m always impressed with. When did you become interested in illustration and can you give us a little history of when you wanted to take this direction with your life?

Vince: Thanks for asking me to take part in what I assume will be a vicious hatchet-job. I suppose I’ve been drawing since before I can remember. Of course, if you’re any good at drawing as a child, every busybody aunt and school teacher you meet says, “You should be an artist when you grow up.” And you agree with them despite your long-range plans to become a superhero.

But eventually I discovered being a superhero wasn’t going to pay the bills and I decided maybe this art thing was a viable alternative. Don’t take that as affirmation that being an illustrator always pays the bills either, by the way. But I’d say the die was cast pretty early and it’s a pretty comfortable fit for me.

Illustration is something that’s always been vital to me, and something that I really can’t imagine not doing. I love being able to take what’s in my head and put it out there for other people to see, I love the community of illustrators, cartoonists and fantasy artists I interact with, I love discovering new art and trying to deconstruct it and discover its secrets. Every day I see something or learn something from illustration that makes me want to re-apply myself to that craft. And it does leave my nights free, you know, for the superhero thing.

David: You do a lot of different types of illustration and one being children’s art. What are the tools you use to when you are working? 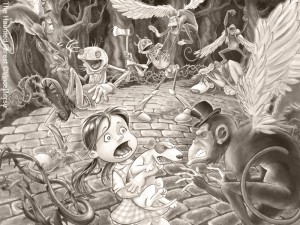 Vince: Most of my illustrations still start with good ol’-fashioned pencil and paper. I just like the way it feels, dragging that lead across a textured surface. I could do that all day (and often do). Once it’s on paper, I scan it in and, whether it’s children’s illustration, fantasy art or comics, the rest is done in the computer. As far as other indispensable tools go, I like a nice, big monitor, a Wacom tablet, and a handful of programs like Photoshop, Illustrator, etc. I just downloaded Manga Studio to give it a test run on my comics work so we’ll see how that goes. I’m always experimenting with technique, so it never gets boring.

David: One of my favorite things you are unfolding before us is the story/comic “Untold Tales of BigFoot”. Can you share a little about where the idea came from and where do you see this tale going in the future?

Vince: I’m glad you’re enjoying Untold Tales of Bigfoot. I’ve always been drawn to oddball stuff like the Loch Ness Monster, the Bermuda Triangle and Bigfoot.  And if you dig deep enough into my childhood, you might also find the sad tale of a lost dog. So the building blocks of the story have been there all along. 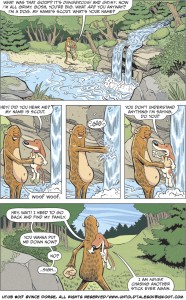 The webcomic was really just an experiment when I started, something I thought might improve my comic illustration and writing skills. I wanted to tell a story about loneliness, abandonment and loss – that’s the kind of fun guy I am – and Bigfoot just seemed like a perfect fit. Everything else fell into place as I fleshed things out. It’s been going for just a few months now but I’m already faster than I was when I started, and the digital inking is feeling a little more natural.

Where’s the story going? Without dropping any spoilers, I’ll say that I just did the layouts for a few pages that could be considered “action-packed” and I’m whittling away at the outline of an upcoming story arc that might answer some questions about Bigfoot’s back-story. Aside from that, I’m also working on a related project about Scout that may end up as a mini-comic or back-up story if Untold Tales of Bigfoot ever sees print.

David: Who would you consider to be the greatest influences on your work and your heroes in the art world?

Vince: I get this question enough that I should have a polished response. But I don’t. So let me meander through a miserably incomplete list of art heroes first: Jim Henson, Charles Schulz, N.C.Wyeth, Norman Rockwell, the Golden Age animators of Termite Terrace and the Nine Old Men, Will Eisner, Wally Wood, Bernie Wrightson…all masters of the craft of telling a story visually. I’m still learning things from them every day. 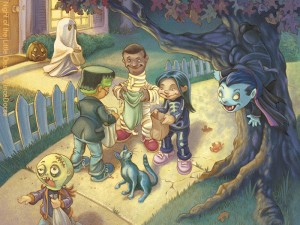 As for the greatest influence, I’d have to say my Dad. He and my mom both encouraged me to develop my drawing ability, and never hesitated to fork over dough for art lessons and supplies (though I’ll never forgive either of them for making me go outside and play organized sports). My Dad didn’t draw professionally, but he drew for fun and he knew how to get an idea across visually. I remember drawing along with him at a very young age and having a blast. Encouragement like that goes a long way.

David: What would be the greatest compliment you could receive for your work and how would you like your art to be remembered? 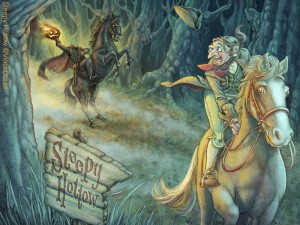 Vince: The greatest compliment to my work? Gosh. Well, I’ll tell you…the mercenary side of me thinks a higher asking price is always a nice shot in the arm. But, really, it’s been a great compliment to me to see how many people are enjoying Untold Tales of Bigfoot, coming back for more, asking me about it. All the positive feedback is very encouraging. I’d have said “heartwarming” but my cartoonist friends would’ve kicked me for getting mushy.

As for how I’d like my art to be remembered, I guess actually having your art remembered at all is a pretty good trick. Lots of stuff comes and goes and you never hear about it again. So if I manage to climb that mountain and people are still talking about my art when I’m a 350-year old man, whether it’s my comic art or my children’s illustration, I guess I’d like it to have touched people emotionally, made them happy or sad or scared or thrilled. I think it’s probably what every artist wants – to be able to touch people deep inside without having to resort to invasive surgical procedures.

David: Haha, and I know you have produced work that resonates with an audience that wants more. Vince your art is astounding and I look forward to more of “Untold Tales of BigFoot” and the beautiful illustrations that take us beyond our imaginations. Thank you Vince for taking the time to give insight into your artistic world and for sharing your work here at Don’t Pick the Flowers. 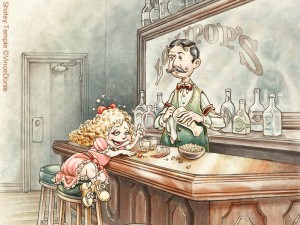 Here are the links so you can discover more of Vince Dorse and his wonderful world of Bigfoot and fantastic illustrations.