James Anderson: and the world of “Ellie on Planet X” 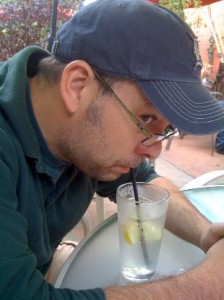 James Anderson is a truly exceptional cartoonist. James is the creator of the web comic “Ellie on Planet X” and his characters are engaging and the art is fantastic. I really love the style James uses to create his art and I was thrilled to contact him and find out how he came up with “Ellie on Planet X”. Here is part of the conversation and I know you are going to love his comic.

David: Hello James, you have truly fantastic comic called “Ellie on Planet X”. Where did the concept for your comic come about and when did you become interested in becoming a cartoonist?

James: Thanks and thanks, David, for including me in with so many great artists! 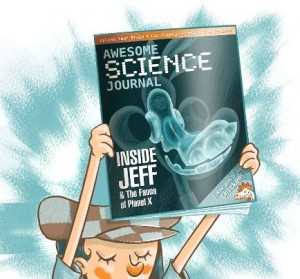 Just like a lot of cartoonists, I started drawing the moment I could scribble on the walls in crayon. I don’t know that I ever consciously decided to become a cartoonist, but a lot of the art I liked as a kid (and proceeded to trace over) tended to be from comic strips like Peanuts or Star Wars comic books.

The idea for Ellie on Planet X has grown over something like a ten year period. I had been doing some Star Wars comics for West End Games and one of the stories took place on a strange little planet. So I decided to create a strange little planet of my own and populate it with flora and fauna from my imagination. The idea of world building just appeals to me and I’m a big fan of Tolkien, as well as James Gurney’s Dinotopia.  I’ve always loved dinosaurs too, and they influenced the animals I drew and how I evolved them into different shapes and sizes.

The only thing my planet was missing was a story. At some point I decided it needed someone to explore it. At the time I was first coming up with ideas, the Sojourner rover was rolling across the surface of Mars and it hit me that my explorer needed to be a robot. Originally Ellie’s story was going to be something of a children’s book, but it just slowly became more comic-like.

David: I love the style of your comic and artwork. What are some of the influences that help mold your creations? 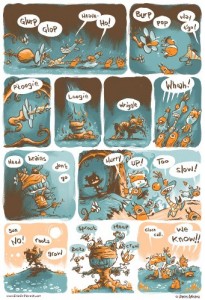 James: Most of my childhood influences were from Bugs Bunny cartoons and Star Wars. It wasn’t until I got older that I really became interested in comic strips. The big one for me in high school was Bloom County. I’m sure a lot of that shows up in both my art and writing. I probably would have been all over Calvin and Hobbes at the time too, but it wasn’t in our paper. I didn’t discover that until later but now it’s one of my favorites.

In college I had my own strip in the school paper. I started reading a lot of older strips at the time like Thimble Theatre with Popeye and Polly and Her Pals, but fell in love with George Herriman’s Krazy Kat. More recent influences include the comic strips Cul De Sac and Mutts. I’m a big fan of deceptively simple iconic characters.  Other art influences include Frank Espinosa, John K., Scott Morse, Dr. Seuss, and so many more than I can think of.

David: What tools do you use to create your art?

James:  Ellie’s completely digital. I write it and draw it on a Cintiq or on an old tablet PC I have. I really like being able to skootch things around and have multiple undo’s. I sketch the strip out using Autodesk Sketchbook Pro, and then “ink” it on another layer. Then I do all of the large areas of color using Corel Painter. Then it’s back into Sketchbook Pro to add the finishing touches and the word balloons. Most of the brushes I use are just stock versions that have been tweaked a little.

I get a lot of comments about my colors palette. I like using the minimal color – it keeps the artwork unified and also makes it easier and quicker to produce because it limits my choices.

David: What kind of cartooning routine do you have and what sparks your creativity?

James: I have the worst routine. I begin by freaking out the day I have to come up with a new comic. So I take an extra long shower or go for a long car ride until I come up with an idea that I think works. Usually at the 11th hour. Finally, I sit down and do the strip, uploading it minutes after I’ve completed it. I understand that Berke Breathed drew Bloom County sitting on the plane on his way to deliver his strips. That’s what I’m going for.

As to what sparks my creativity, it comes from all kinds of things like paleontology, the novels of Hal Clement, Star Wars, Seinfeld, playing Sim City, my dog, looking at great art, and just talking with other cartoonists.

David: What future plans do you have for your art and comics? What can we expect to see in the future for “Ellie on Planet X”? 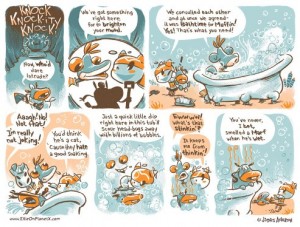 James: I’m currently in what they call a “transitional phase”. I’ve been a graphic artist for such a long time and now I’m leaning toward doing more illustrative work. I have children’s books I’d like to see published too. As for Ellie, I’m just going to keep doing the strip and hope I can entice more people to read it. I hope to publish a book sometime in the next year that would be something special, more than just the comic. And then, who knows? Just like Ellie, I’m kind of on my own adventure. We’ll see how it turns out!

David: I can’t wait to see what is next. James thanks so much for sharing your comic, as you know I absolutely love it.

Check out more of James Anderson and “Ellie on Planet X”: